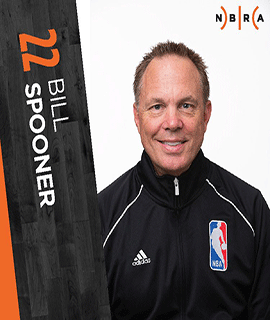 Bill Spooner has officiated 1,506 regular-season games and 122 playoff games over 29 seasons as an NBA official. His other assignments have included the 2005 NBA All-Star Game in Denver.

In addition to his NBA work, Spooner has seven years of collegiate officiating experience in the Pac-12, Big West and West Coast conferences. He also spent eight years as a high school official in his home state of California.