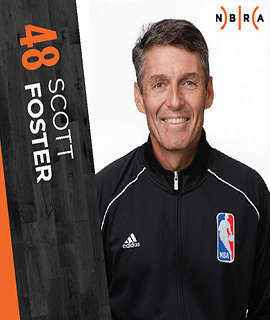 Scott Foster has officiated 1,413 regular-season games over 24 seasons as an NBA official. He has also refereed 176 playoff games, including 18 Finals games.

He was a member of the crew that officiated the 1996 Europe Tour in Germany and Spain. Foster also worked the 2010 NBA All-Star Game in Arlington, Texas.

Foster considers his most memorable assignment to be Game 7 of the 2010 NBA Finals between the Los Angeles Lakers and the Boston Celtics. He worked the game with two of his mentors, Dan Crawford and Joey Crawford.